I've really been into pie baking lately. I don't know why, I mean I've always loved baking, but usually I bake cakes and cookies.

Pie not so much, because for so many years pie crusts were challenging for me. I guess it's just a matter of practice (and patience), as I've gotten older pies have become easier for me.

But that doesn't mean you have to wait until your sixth decade to learn to make pies! My daughter-in-law makes beautiful pies!

My mom always made her pie crusts using just Crisco shortening for the fat. She followed the recipe on the can and her crusts were beautiful, flaky, and delicious.

Unfortunately, using that recipe never worked for me. Oh, it tasted great, I just had a heck of a time with the rolling and transferring to the pan!

Then years ago I had a dear friend who also made delicious pies...and she had a secret...her secret was to measure the fat using a tablespoon instead of a ½-cup measure.

With every tablespoon, instead of leveling it off, round it a little. Well, that was a revelation for me! As soon as I started adding that small bit of extra fat to my pastry recipe, my crusts became easier to handle.

So, here is my recipe for a 9" to 10" SINGLE pie crust with the extra fat already added to the recipe, no need to use my friend's tip. For a double-crust pie, just double the recipe. And if you use the food processor method, it is a snap! 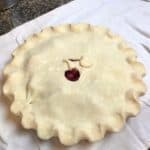 The recipe, as written, makes ONE CRUST for a 9" to 10" SINGLE crust pie. Double the ingredients for a double-crust pie. You should have dough left over to be able to make a few decorations for the top of the pie if you like. Also, you can use all butter, as the recipe is written or feel free to make it half butter and half shortening or all shortening. The combo of shortening and butter will yield a bit flakier crust, but sometimes, all butter is better!
Prep Time10 mins
Cook Time15 mins
Refrigeration1 hr
Total Time1 hr 25 mins
Course: Dessert, Snack
Cuisine: American
Keyword: apple pie, Pie Crust
Servings: 1 single crust
Author: Anna

To Pre-Bake Crust for a Single Crust Pie - Blind Baking

For a Double-Crust Pie

Pie Crust is the ultimate Do-Ahead. You can refrigerate the dough for up to 3 days OR you can freeze the dough for up to 3 months. If you are the pie person in your family or group of Gr8 Friends at the holidays, make your life easier and prepare your dough ahead of time. One of those nights when you find yourself with nothing else to do (that happens???), whip up a couple batches of pie crust pastry! Just form the dough into disks, wrap in plastic wrap, place in resealable plastic freezer bags and freeze. A day before you will be baking, move the dough from the freezer to the refrigerator. When you are ready to roll out, leave the dough out at room temperature for about 30 minutes to an hour until it becomes pliable enough to work. Even if the dough has just been refrigerated, it may be too cold to roll. Just let it sit at room temperature for a few minutes.
Tried this recipe?Mention @Great8Friends or tag #gr8food!
« Arugula Salad with Lemon Parm Dressing
All-American Cherry Pie Recipe »