This cast iron Skillet Cornbread is a savory quick bread that is delicious and easy! The addition of jalapeños gives it a nice pop!

As y'all know, my mom didn't like to cook, but she always got dinner on the table, thanks to the conveniences of the 20th century...canned goods and cake mixes! So the first time I ever had homemade skillet cornbread it was a revelation. The bread had a nice crumble to it and wasn't sweet at all, it was a savory bread.

The doctor I worked for (when I was very young!) had been raised in the south and made his skillet cornbread the traditional way without wheat flour, he used just cornmeal. And buttermilk and bacon grease gave his bread the almost tart flavor that paired so well with his "Chili Beans;" another southern dish that I one day need to try!

I never got his recipe, but over the years of trying lots of different skillet cornbread recipes, I think I've finally come up with a bread that is closest in taste to the one that captured my taste buds so long ago. This uses butter instead of the traditional lard or bacon grease and I've added a bit of sugar to take the edge off the tart flavor. To enhance the moisture, a can of creamed corn is used and to make it pop a bit I added some jalapeños.

We recently served this with Jurga's Barbecued Ribs and our Kale Slaw recipe...it was a GR8 meal! 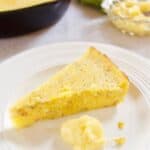 Serve with Honey Butter! Combine 4 Tablespoons softened butter and 2 Tablespoons honey and mix. If you want this whipped, use your electric mixer, or you can just mix it together with a fork.
Tried this recipe?Mention @Great8Friends or tag #gr8food!