Irish Beef Stew with Guinness is a recipe that cooks all day to deliver a delicious, warm and comforting meal in the evening. Or make this in the Instant Pot! The perfect comfort food meal.

When we think of the foods of Ireland, potatoes come to mind. And I love potatoes! When I was a kid and my mom would make stew all I would eat is the potatoes.

Once those cubes had cooked in the gravy for hours they were soaked with all the flavors of the meat and veggies.

Can I make this stew in my Instant Pot pressure cooker?

Stew beef is typically not from a tender cut of meat, so it needs to either simmer for a long time to break down and tenderize the beef or it needs to cook under high pressure.

If I have a busy day, I like to use my slow cooker, because I can prepare the stew in the morning, forget about it, and have a Gr8 meal that evening.

My mom always used her pressure cooker to make stew. This method tenderizes and cooks the meat in a fairly short amount of time. So I've also added the instructions for the Instant Pot electric pressure cooker.

PS - I prefer the stew in the Instant Pot, but only because it reminds me of the stew my mom made. The CrockPot® is still a Gr8 alternative if you want to do all the work in the morning.

Whichever method you use, enjoy an Irish Stew, easy enough for a weekday, delicious enough for company!

How to serve stew as a weeknight meal.

How do you thicken Guinness stew?

Sometimes the potatoes will thicken the stew juices enough. However, if your dish is finished cooking and the gravy is still thinner than you prefer, use corn starch as a thickener.

Remove the meat and veggies from the slow cooker and place in a large bowl or serving dish. Turn the cooker to high and whisk in a couple tablespoons of corn starch. Continue to whisk occasionally until the gravy is thickened.

If you want this step to go faster, pour the liquid into a small pan and put in on the stove over medium-high heat. Then add the corn starch, whisking until thickened.

If you've used the pressure cooker, use the same method. Remove the meat and veggies, turn the instant pot saute feature on, and whisk in the corn starch until thickened.

Then pour the thickened gravy over the stew, stir, garnish with parsley and serve.

As the stew cooks the alcohol from the beer cooks off, evaporates, so the finished meal does not contain alcohol.

But the flavor from the Guinness is unmatched!

What to serve with Irish Beef Stew?

We love to serve our Irish Soda Bread alongside this stew. And for dessert, how about some Irish Cream Fudge? 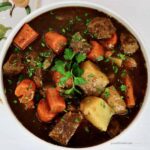 This is a simple peasant meal that cooks all day in the slow cooker or in less than an hour in the pressure cooker. Some people add peas at the end for color and flavor. I like a sprinkle of parsley for the fresh flavor it lends to the dish.Cook times are for the slow cooker.
Prep Time20 mins
Cook Time20 mins
Slow Cooker Time8 hrs
Total Time8 hrs 40 mins
Course: Beef, Main Course, Stew
Cuisine: Irish American
Keyword: Beef Stew, Guinness Irish Beef Stew, Slow Cooker Beef Stew
Servings: 6 servings
Calories: 474kcal
Author: Anna

Electric Pressure Cooker Instructions - 1 hour of pressure cooking time from start to last release - plus the ~40 minutes of prep/browning time.

Gr8 Do Ahead Tips: This dish can be made the day before and reheated on your stove-top or in the microwave. I have frozen mine in a freezer bag. It reheats okay, but the potatoes are a little mealy. This stew is definitely better before being frozen. *Recipe amended 2/22/21 - removed butter used in browning and just use oil.