It's Cinco de Mayo! So today's restaurant review is of a new Mexican restaurant in my town. El Cholo, was first opened in Los Angeles in 1923. They have several locations throughout Southern California, but I had never heard of them until they opened right down the street. 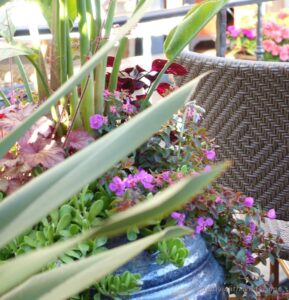 The El Cholo family has created a welcoming vibe that feels traditional to this "gringo." Entering the courtyard you immediately forget that the Coast Highway is on the other side of the wall. They have transformed a gray concrete space into a colorful, comfortable, and inviting patio dining area. The built in seating area along the wall is dotted with pillows of aqua, vermilion and goldenrod. Flowering potted plants in abundance exude a calmness as a nice contrast to the bright colors, and a multitude of umbrellas protect diners from the sun. The inside of the restaurant is just as cozy, you get the feeling you have entered a more traditional, rustic ranch through a beautiful garden.

We sat at a table that felt private and secluded, even though we were right at the entrance to the courtyard! The menu is simple yet complete; including everything from traditional "combinacione" dishes of tacos, enchiladas, rice and beans, to salads, beef and seafood offerings. 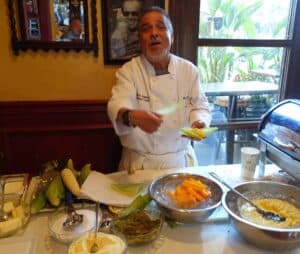 We happened in on the night of the kick-off party for "Green Corn Tamale" season! The restaurant was offering samplings of these house specialty tamales only served May through October. There was live music and Chef Roberto Juarez was doing a cooking demonstration of the tamales. Tamales are always delicious, and the sweetness of the green corn mixture with the counterpoint of the cheese and peppers made these a lovely departure from traditional tamales. 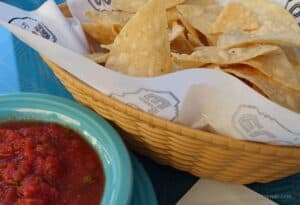 Of course, El Cholo serves the classic chips and salsa, in which we always over-indulge! We also ordered the guacamole to accompany the chips. If you do this, beware.... There are two guac choices on the menu, a half order of guacamole for $7.95 and guac prepared tableside for $12.25. The minute the waiter came to our table we asked for the guacamole and pointed to the ½ order. (At that point, I had not noticed the tableside option.) As he was leaving the table, he asked if we would like the "guacamole tableside." I said yes, and then a few minutes later noticed the more expensive choice on the menu and realized that a mistake was about to be made. I called the waiter over to correct the error. Immediately upon his leaving the table, the "tableside preparation" arrived.

To El Cholo's credit, they took the charge for the more expensive guacamole off of our bill. But do be careful, the restaurant is busy, so make sure to be specific about which guacamole you would like to order or you may be spending more than necessary! Since there were only 2 of us, we didn't need the larger option. 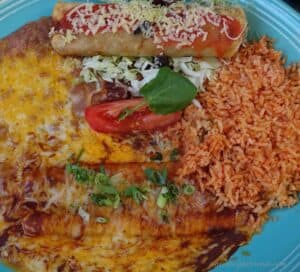 For dinner my husband ordered one of the traditional combinaciones including a Beef Taco, Cheese Enchilada, Rice and Beans. The Beef Taco was shredded beef with plenty of flavor and the Cheese Enchilada was as is expected. The great surprise was the Rice which tasted like classic Mexican Rice should, it was tomatoe-y and perfectly cooked. My husband's favorite part was the Refried Beans. Now what can you do with Refried Beans, you ask? Well, there is plenty that can go wrong, with the worst being the beans tasting mostly of fat. El Cholo's beans were creamy with the flavor of the pinto evident. 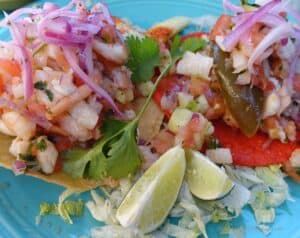 Going an entirely different route I ordered the Shrimp and Scallop Ceviche Tostadas. After the chips, salsa and guacamole it was time to lighten things up! Ceviche, as you know, is a combination of raw fish "cooked" in the acid-y juice of lemons. The key is starting with truly fresh fish, just as in sushi. El Cholo's mixture included the super fresh shrimp and scallops, crunchy jicama, tender tomatoes, cooling cucumber, sharp red onion, savory cilantro and, of course, the citrus notes. I especially enjoyed the jicama, with the tenderness of the fish and tomatoes, the jicama added a satisfying crunch to a refreshing and healthy meal.

The staff is still working out some kinks in the service, but overall this restaurant was a pleasant surprise and we will definitely visit again. There are six locations in Southern California, you should definitely check it out!

« If You Are Ever in Cinque Terre...
Buongiorno di Firenze! »