Cilantro is one of my favorite herbs. I love it in a salsa, a fish, a cocktail and maybe even a soap...if there was one, but I think people might turn the other way if I smelled like it! Probably better to just keep it in the kitchen!

When I was given "Island Rice" as my designated dish for Kyle and Joel's Margaritaville themed dinner, my mind immediately went to coconut! When you think of "island," don't you think of coconuts?! Well guess what I found? A recipe that had coconut milk AND cilantro! My mind was made up! And lime, too? Done! Recipe found, grocery list made, let's get going!

At first bite, close your eyes. Your tastebuds will take you to the islands...fictional like Jimmy Buffet's Margaritaville or a real oasis, with the sound of the ocean and the rhythm of steel drums!

Don't let the idea of coconut make you think twice, though. This recipe doesn't use coconut milk as the sole liquid cooking the rice. It is combined with water to lessen the richness that coconut milk usually gives, creating a subtle coconut flavor perfect with that added squeeze of lime.

Coconut Lime Cilantro Rice is a great side dish, stark white in color, with the bright green contrast of cilantro. It would also be a delicious addition to a Mexican feast. Especially perfect when served alongside any entrée hot off the grill. 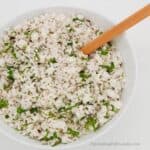 Prepare the recipe through Step 5, put the rice in a bowl, cool and cover with plastic wrap. To warm up, mist with water. Then continue with Step 6.