This Apple Berry Dutch Baby with Maple Ricotta Cream is a delicious fluffy pancake which begins in a skillet and is finished in the oven. It's actually a Gr8 breakfast idea because it's so easy!

The first time I heard the phrase "Dutch Baby" was when we were visiting my husband's relatives in Italy. Only it wasn't something to eat...it was my daughter!

You see, we have three kids; the first two have dark hair and brown eyes and skin that tans easily, like their Italian dad. The baby (not such a "baby" anymore), is fair like me, blond and blue eyed.

Our relatives in the small town of Pietralcina in southern Italy referred to her as our "Deutsche Bambina"...Dutch Baby!

So when I heard there was actually a dish called a Dutch Baby, well, you know I had to try it!

What is a Dutch Baby?

A Dutch Baby is basically a giant pancake with fruit baked in the oven. And it is easy and perfect if you have company for breakfast or dessert, because it makes a beautiful presentation served directly from the cast iron skillet.

Traditionally, cheese is served with apples; and maple syrup is served with pancakes. The Ricotta Cream that is served alongside this does several things. (Caution: justification ahead!)

First, the cheese is a good counterpoint to the sweetness of the fruit and pastry. Second, the cheese and the eggs are proteins which is a healthy balance to the carbs in the dish.

So go ahead...make this Apple Berry Dutch Baby with Ricotta Cream and enjoy it guilt free! 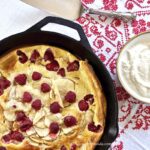 For Your Gr8 Shopping Convenience:

This slicer is one of my favorite and most used kitchen tools.